Well I had big plans for today.

Was going to unhook and head out over to Lisa’s to pick up my mail at the last RV park where I stayed.

Good news – Lisa and Kevin decided to drive the mail over to me to the new park where I was staying.

Bad news – FedEx delayed another shipment that was supposed to be in today and it’s coming tomorrow. Argh!

Now I have to kill another day in Yuma before I get to New Mexico.

I’ve got the New Mexico non resident state park pass And wanted to start using it.

Good news – I am hanging out at the From the Farm produce farm through Harvest Host. It’s an organization of wineries, Berry farmers, breweries and produce farms that let you stay for free overnight. Since I was just staying one night it was perfect.

My camper shading the cabbage!

Bad news – I was headed to Castle Dome Mines and Museum When my tire pressure monitor kept going off for my inside driver side dually tire. Said it only had 19 pounds of pressure in it.

2 days ago I took it into a shop because it was reading 12 pounds. They put 65 pounds in it and it held it so I drove off. So with that leaking again today, I decided to go back to same franchise shop, Ed Whitehead Tires in Yuma to have them look at the tire pressure minor system to see if it was the monitor or the tire. I was thinking since it didn’t leave air in the tire than it probably had a nail or screw in it. I headed to the tire shop.

Good news – Nothing wrong with the tire monitors. He did an inspection and decided to take the tires off. My camper weighs 11,600 pounds!

He wheeled this Jack over there that had a 2″ hydraulic tube and pushed a button, which lifted that camper up like it was a Volkswagen! 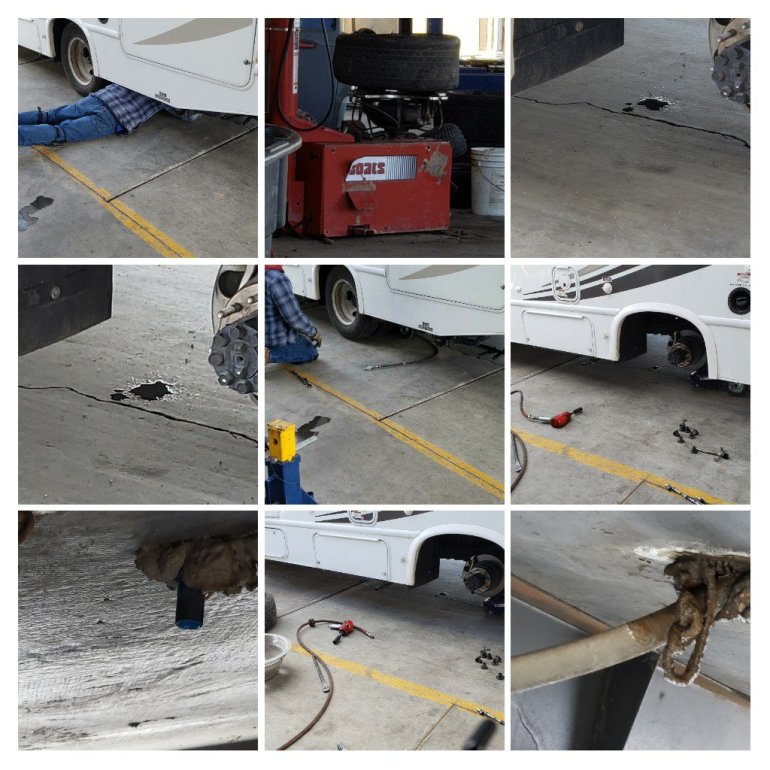 Sure enough there was a big screw hanging out of the inside tire.

Bad news – He also noted the water leak underneath the water tank to the coach water tank. I noticed it leaking last week but I was just in the desert so didn’t matter. It just goes to the outlet drain.

But that’s for another day.

So I’m ending it on the good news that I am back on the road.

Will hopefully pick up my knee brace tomorrow if FedEx gets it there!